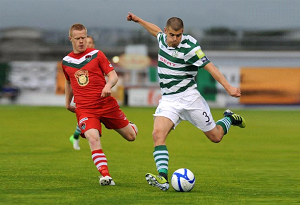 Back in march, Shamrock Rovers played against Cork City, a first leg at the Tallaght Stadium and started the SSE Airtricity League Premier Division season, with an unwished for 0-0 draw. Both Rovers and City had a poor game that friday evening, despite the fact that five former internationals presence, niether side managed to creat real chances and score, except a moment when the Rovers striker Drennan saw his closerange header crash off the crossbar just before half-time. But at time was still a long way to go and things to accomplish as the season unfolded.

After 8 weeks from then, Cork City passed on the second place of the Premier Divisions table, with 4 points ahead the Shamrocks.

Shamrock Rovers made it to score a record of breaking 16th League Cup semi-final with a 1-0 win against Derry City on the Brandywell stadium on Tuesday evening. Sean O`connor`s kick free goal, probably made the diffrence in the quarter final of this EA Sports Cup season.

Rovers have an excellent defensive record and the City should expect a very tight game, even though they also have great results at matches played at home Turner stadium.

It should be a very interesting game to see, considering both teams are more or less on the same point of technical value and results, would have equal chances of winning the game, so i must say it might be a draw.