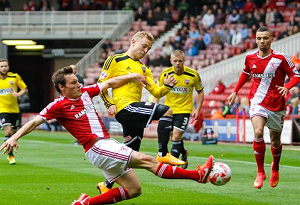 Middlesbrough is now once again in the promotion playoffs, after many years, to be exact, 27 years since the dramatic double against Chelsea, double that launched them straight into the Premier League.

That season, Chelsea was favorite, but the draws against Portsmouth and Charlton sent the team into the playoffs, they passed into the semifinals without great difficulties and played the final for the promotion, against Middlesbrough.

The first-leg was played on the Ayresome Park where Middlesbrough played a commanding game and Chelsea settled for defense, losing the game. “Boro” won the game scoring 2 goals and becoming the favorite to the title.

Unfortunate events happened in the North East the evening after the outcome of the 2nd-leg and there were over 40.000 people on Stamford Bridge. Middlesbrough won again, leaving Chelsea out of the Premier League, that year. Unfortunately, people remember more the incidents after the game than the game itself.

Middlesbrough were relegated at the end of 2009, then, seasons to come, failed to return among the elite of the English football.

Now, Middlesbrough plays against Brentford in the semifinals, a dangerous team, that can surprise at any time, the favorite. It was a big thing for the team when they managed to secure a spot into the semifinal, and it seems that the Brentford will not give up easily.

Whatever the outcome, it has been a terrific season for the Brentfords players, an impressive one as well, considering the 21 years away.