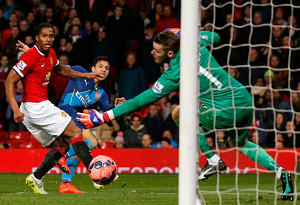 Manchester United and Arsenal are meeting today at Old Trafford, playing for a spot in the Premier League .

United lost three games, one after another until they played against Crystal Palace, last weekend, and they need one more point to secure their place in Champions League qualifications. They never lost a home league meeting, with Arsenal, since 2006, and never conceded more than one goal at home,to Arsenal.

Considering Rooney is out, failling to recover after the injury he got at one leg, analysis of the match should be, maybe a bit diffrent. It`s hard to think Arsenal will lose this game, they`ll surely want to show the world that the Swansea result was a mistake, an error. They`ll maybe create many more chances than United, maybe hoping to outplay in the midfield.

Danny Welbeck will also miss the chance to play this game and face his former club as he had been ruled out due to a knee injury.Trey`re still motivated and Arsenal`s coach Arsene Wenger declared: “I would love to have him available but we will have to do without him.”

Odds are on Manchester United as they seem assured of a place in the first four, securing Champions League qualification, currently being six point ahead Liverpool in fifth place with only two games remaining.