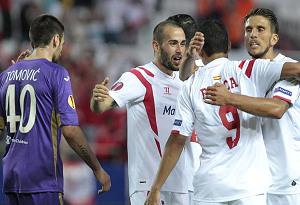 Fiorentina plays the second-leg against Sevilla, winner of the first-leg. Hopes are high!

It seems hard to imagine a passing of the Fiorentina into the finals of Europa League, considering the fact that the opponent it`s also the favourite to win the game.

Andalusian fans were very supportive and made a beautiful atmosphere. Vidal opened the scoring after 17 minutes. Immediately, Fiorentina had a chance to tie the score, but Matias Fernandez didn`t manage to use the opportunity to the team advantage, that was one mistake from many, during the lasts week encounter, mistakes they seem to pay at a high price. Trying to make their way into scoring, the Tuscans were puzzled by Sergio Rico. Sevillas goalkeeper, once again had an exceptional intervention on Salah’s attempt to score.

At the 52nd minute, just 7 minutes after the break, Vidal running down on the right side, with a pass from Vitolo, strikes a second goal, seeming a natural born player and doubles the lead, followed by Gameiro with the third goal.

Fiorentina instead, made some substantial errors, errors that may cost them a spot in the finals of the Europa League.

Montella`s men are probably still recovering from the last disaster with Sevilla, who scored 3 goals, finishing the first-leg with a commanding 3-0. Fiorentina is obviously hoping for a comeback in the second-leg, they would have a really difficult task considering their lack of concentration in the last game, but they surely have a shot, in football everything is possible, you can never know what`s gonna` happen.