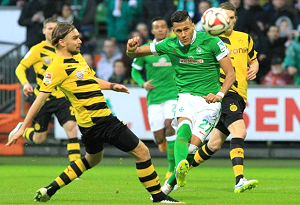 Even if it`s still a full week ahead the cup final, for Dortmund it`s already something in the air, maybe the smell of farewells. As we all know it will be the last match for Sebastian Kehl and Jurgen Klopp in Bundesliga.

Jurgen Klopp, over the years was seen as an entertaining figure full of emotions, but also appreciated for the professional way he coaches.

On the other hand Sebastian Khel, will probably have a well deserved farewell from the club ahed of the game. He ends his career after 13 great and eventfull seasons. He had ups and downs, some serious injuries, injuries that at the time, maybe prevented him to have a better evolution at the national german team, some unsuccesfull periods but at the same time he enjoyed glorious and terrific times as a former captain and midfielder at Borussia Dortmund.

This weekend Borussia Dortmund hosts Berder Bremen for a very important match in Bundesliga, it will be a “battle” for the sixth place on the table of Bundesliga and also the qualification for a spot in Europa League. As Klopp said it himself, the black and yellow players, will have to really focus on the game and forget about the farewells for at least 90 minutes.

Dortmund climbed to seventh last week, winning all possible three points, with a 2-0 home win against Hertha Berlin, with Neven Subotic and Durm scoring, and they rarely do.

Will certainly be a great game, a fully loaded stadium, a very good reason to dispute the victory, it will be much more than a regular match.