Written by Tips Free on May 12, 2015. Posted in Daily Match Predictions - Match Preview

For Juventus and Real Madrid the open draw of the Champions League semi-finals was a win-win result. The players of Madrid have escaped a showdown with Barcelona or Bayern, meeting the most accessible team in the semi-finals of the competition.

After losing the first-leg, playing against Juventus Torino, Real Madrid is now in danger to lose the chance of winning the title of Champions League. Elimination seems not to be an option for the Real`s impatient president, Florentino Perez. He`s known for not keeping coaches that don`t manage to bring titles or trophies on regular bases. Looks like, bad news for them.

The newspapers and sports chronicles are talking lately, about a real possibility for the Juventus to win the second-leg, leaving Real Madrid to face a really bad turnout.

The italians were undefeated on their own ground in this season of Champions League, getting four victories and one draw. The same thing with Ancelotti`s men, four winnings and one defeat, but they seem unfocused and showing inconsistency in the last few weeks.

This match seems to be the most important for the past 12 years, for the Juventus, but Allegri “thinks”, as he said, they have the experience to play a match of such importance, it`s obvious the fact that they are very motivated to focus and make the best of it.

Hopes are high for Real Madrid getting past Juventus, getting into the finals in Berlin and they surely remain the favourites to win this match, but it seems to be a difficult thing to accomplish seeing Juventus impressive defense, while Real`s attack is also very important. We will have the opportunity to see a well balanced and beautiful match, that`s for sure.

Written by Tips Free on May 12, 2015. Posted in Daily Match Predictions - Match Preview 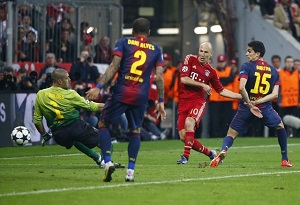 Fc Barcelona is close to the final, once again, this time having as opponent the Bayern München, after they won the first leg, where Lionel Messi scored the first goal at the 77th minute, when Alves made his way in finding a clear pass to Messi, at the Camp Nou.

Barcelona is looking for the first time at the oportunity to win the semi-finals of UEFA Champions League in Munich.We all remember also that Bayern overwhelmed Barcelona 4-0 in the first leg of their 2012-2013semai-finals, when Thomas Müller scored twice and Mario Gomez and Arjen Robben one apiece.

Josep Guradiola, is preparing hard for the second leg with Barcelona, but some say is a “mission impossible” in trying to change the fate of the qualifications for the finals.