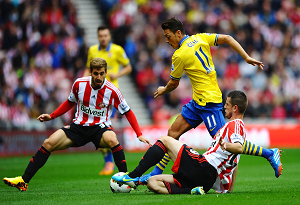 An interesting match today, Sunderland are visiting Arsenal today. Sunderland is struggling to secure their place in the Premier League, even if right now are placed on the 16th place on the Barclays Table with a total of 37 points. Arsenal instead, as we well know it, are much better positioned on the 3rd place with 71 points earned `till now, they`re obviously hoping and doing their best to keep the 3rd position on the Table.

Arsenal has some problems regarding some of it`s players, due to injuries, we`re talking about Danny Welbeck who hurt his knee and midfielder Alex Oxlade-Chamberlain, full-back Mathieu Debuchy and captain Mikel Arteta who injuried his ankle, are still out, not being fully recovered and still not fit for the match.

Sunderland also have some injured players like defender Wes Brown, midfielders Jordi Gomez, Ricardo Alvarez and Bridcutt, remaining on the sidelines. Jack Rodwell instead, should be good to go.

If we are to consider all these incidents which finished with injured important players, who take a long time to recover, not being able to contribue to their teams efforts in playing and hopefully winning the Premier League games, for a spot on the Premiers Table, we must notice the agressive and maybe pasionate way of playing the games, probably due to great hopes and tones of work behind these matches.

However, The Sunderland will face an Arsenal who won 13 of their 17 matches in the Barclays Premier League. The Gunners would need to win this game to seal their third place and secure a spot in the UEFA Champions League. So we can honestly say the stakes are high.

I`ll say the odds are on Arsenal today, considering the motivation and previous results against Sunderland, at least.